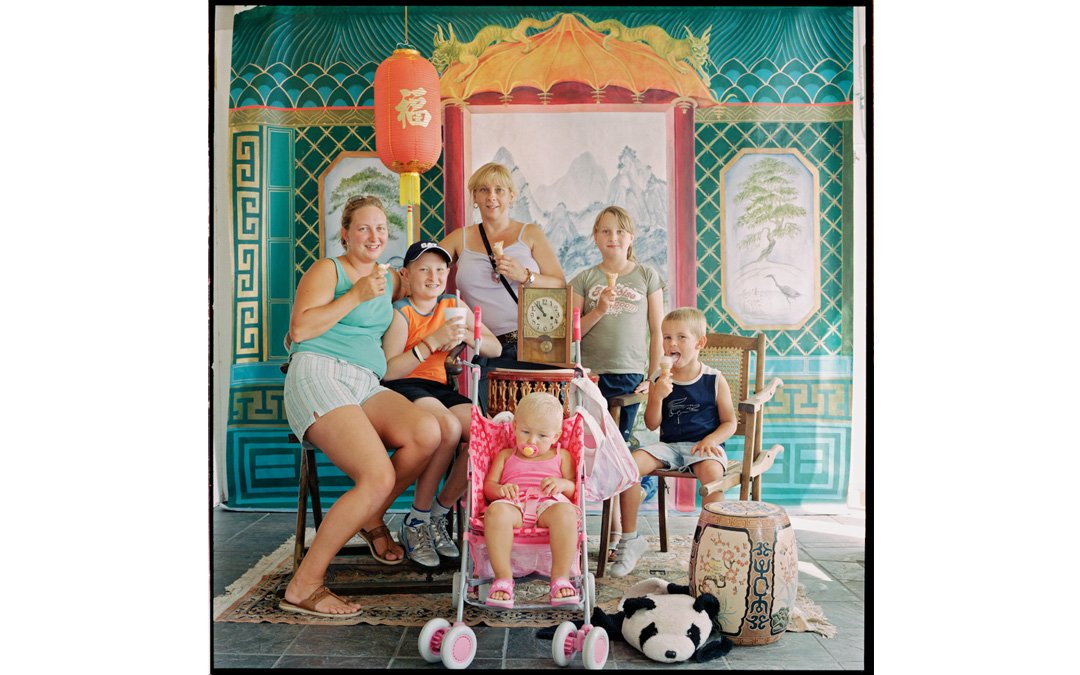 In the summer of 2005, photographer Grace Lau set up a portrait studio on Hastings seafront. The studio was on a busy route, a few doors away from the Iceland store and the former Borough Parking Office and on the main route into the tourist draw of Hastings Old Town. Over six weeks, she made 400 photographs; everyone who posed received a free digital print. She called her project ‘21st Century Types’ and the photographs speak volumes about the way we see ourselves and the way we are seen.
‘Through this project’, Lau wrote recently, ‘I am making an oblique comment of Imperialist visions of the ‘exotic’ Chinese and by reversing roles, I have become the Imperialist photographer documenting my exotic subjects in the ‘Port’ of Hastings… I played the formal photographer, asking them to sit still and look serious while I fussed with focusing and waited for the right shutter second. I also asked them to keep their accessories in the pose, their sunglasses, coke bottles, ice cream, mobiles, souvenirs, sunhats, supermarkets plastic bags…. all this added a contemporary layer to my old-fashioned studio, compressing history and the present into one eclectic image.’

These rich, many layered opulent portraits, made in a community centre on a scruffy seafront, by a Chinese-born feminist photographer, more used to portraying the fetish underworld than families with ice creams, are a monument to place, race, people and the passing of time. Acting the part of the stern Chinese studio portraitist, she created a raucous theatre of photography.

By now, all the children in Lau’s photographs will be almost adult, almost all the dogs, and some of the people, will have passed away. Partnerships and friendships may have fractured, or be still sound, family groups will have morphed, reformed, grown larger or smaller. The photographs of those days in the summer, five years into the 21st century, act as memory and milestone, precise, yet bewildering echoes from the past.

Image Credit: Grace Lau
Copies of Grace’s book ‘Portraits In a Chinese Studio’ published April 2019 by Parakeet Books, will be on sale at the event.