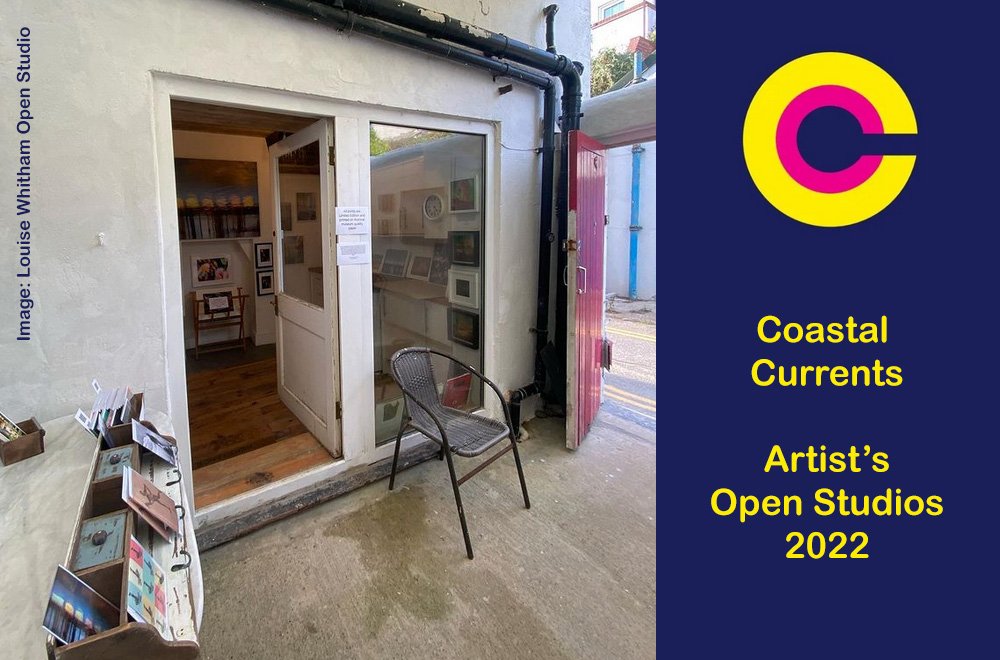 As a recent arrival to St Leonard’s on Sea, Dan Percy writes about his highlights of this year’s Coastal Currents artists’ Open Studios.

Alongside a range of events and exhibitions, the Open Studios are an opportunity to see local artists and makers in their place of work. This year seems a particularly vibrant Festival with over 60 open studios, particularly after the more subdued event in 2021.

There is something about an Open Studio event that has always appealed to me. Part of that is to see their studios space, a glimpse inside interesting buildings you would otherwise walk past. Part of it is to see work that might represent your locality although a  big part is to meet the artist, perhaps someone whose work you have admired for a while. But for me, the biggest draw is to hear first-hand how they make the work and what the creative process looks like for them.

There are only so many studios you can visit so the artists I have picked as my highlights are all challenging the conventions of their discipline and experimenting to combine artistic methods. All are based in photography, but each artist is bringing something to their work that makes it stand out. 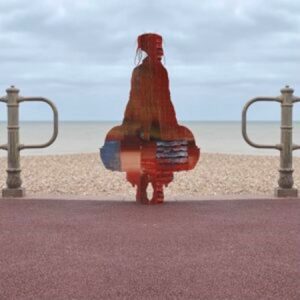 The studio of St Leonard’s based Luiza Machado, with the shelves of a former shop crammed with supplies and materials, evidences the varied approach she takes to her work.

Two sets of pictures stood out for me. One was a set of photos of children chasing seagulls. All slightly out of focus and a visible sense of movement. Luiza felt she had the wrong camera with her that day, but for me that was the success. The photos were not planned or finely crafted. They capture a moment that passed quickly and allow that energy to live on.

Her other set of pictures stood out to me because of their creative process. She has edited photographs to add lines of symmetry or to repeat the image creating spaces that simultaneously look real and unreal. Figures have been cut out and digitally infilled. The whole affect is to present something that is both familiar and unfamiliar, like the brain is having to make sense of its visual inputs. 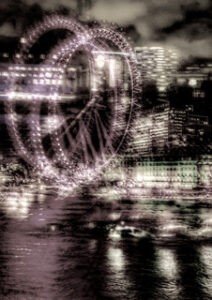 Also in St Leonard’s, Louise Whitham‘s studio is a showcase of experimental practice. Photos taken with a moving camera immediately grabbed my attention, some showing a blur of colour, another of the London south bank creating the sense of a triple-exposed image.

Louise says she follows no rules in making prints, demonstrating this with portraits of an NHS nurse and a suffragette captured on aspidistra leaves using a chemical free process. Knowing these images will fade overtime, this feels like a perfect example of following a process just to see what happens and in doing so rejects the commercial imperative of perfection and longevity.

In another work, determined to capture snow falling in sunlight on St Leonard’s beach, Louise was forced to edit out the other photographers that were out there and who she caught in her photograph. By her own admission getting carried away she went further, bending the foreground perspective and painting the sky to extend beyond the original image. 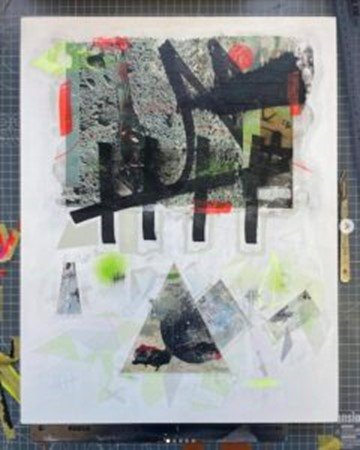 Over at Common Mormon studios in Hastings, Duncan Brown is using various techniques to create his multimedia works. Starting with a recognisable picture of a mountain range or a beach, this is transferred to another surface, usually board or paper but recently aluminium, creating something that partially reflects the original.

Duncan then adds multiple layers over that base using collage, printing, pen and paint. Some of the collage pieces come from previous pieces of work. The result is a riot of monochrome and bright colour invoking graffitied concrete. A detail I found particularly appealing with some tray-framed work, fluorescent paint on the back of the board created a coloured shadow in the gap between picture and frame. With Duncan’s work, I liked that the starting point of a straightforwardly recognisable image, has through multiple steps been transformed into an abstract.

Following these encounters, and those with other artists over the two weekends, I have reflected on what is the importance and effect of viewing art. I hadn’t set out to buy anything and I wasn’t trying to see everything. In stopping to really look, and by talking to the artist about what they done, I came away feeling as much inspired about the process as by the finished work. Getting up close in an event such as this, and the myriad others running in the local area, felt so valuable to me as the viewer and I look forward to everything else the local arts scene has to offer.

Tina Morris director of Coastal Currents has achieved an original, innovative, and creative Festival against difficult funding issues and economic climate. Tina seems to move mountains to make the event happen, long may it continue.