This retrospective exhibition of US born Sussex based photographer, Marilyn Stafford encompasses the most comprehensive display of the photographer’s work to date. Works come from an international archive spanning four decades and include celebrity portraits, fashion shoots, street photography, humanitarian stories and newspaper reportage.

Now in her mid-90s, Marilyn received the prestos Chairman’s award for Lifetime Achievement from the UK Picture Editors Guild in 2020. In 2021 a major retrospective was published: Marilyn Stafford A Life in Photography. Having personally experienced the difficulties of being a woman in a man’s world she is a staunch advocate of women documentary photographers through The Marilyn Stafford FotoReportage Award, sponsored by Nikon UK, and now in its fifth year.

“Many years ago a photographer in New York told Stafford: ‘Photographers don’t grow old, they just grow out of focus’”. Although she is no longer taking photographs she is still very interested in photography and how women are faring in the documentary field. She has no thoughts of fading away, her images will live on as a part of history, photography history, women photographers’ history as well as fashion history.”

I met and wrote about Marilyn Stafford when she had her first show at Lucy Bell in 2017. At the time I was not surprised to see that the documentary’s black and white images were familiar – because they are of their time from photographers Bert Hardy, Roger Mayne, Henri Cartier-Bresson. Robert Doisneau – of feral street kids, 1950’s fashion, refugees. But I was surprised that I had never heard of the photographer.

Born in Ohio in 1925, Stafford now lives in Sussex, but time is of the essence. And she was lucky enough to find herself in Paris at the time of social documentary photographers making waves in the genre. 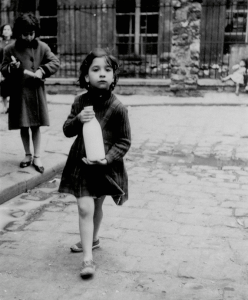 Her early photography influences had been 1930s American documentary photographers Margaret Bourke-White, intrepid foreign correspondent, and Dorothea Lange who covered the US Depression. “We didn’t have television but I was very aware of the Depression, the Dustbowl, of the refugees from Germany, men on the breadline through seeing pictures in Life Magazines, newsreels and hearing the news on the radio.”  She is an intelligent, informed photographer with a knack of finding a story and humanising it. Even her fashion photographs are tinged with warmth and  humour.

She originally trained as an actress. At the age of 7 she was picked to act at the Cleveland Play House Theatre, along with future, well known actors like Paul Newman. She later studied drama and appeared in plays off Broadway. Her husband was a foreign correspondent so she travelled with him to Paris, Italy, the Lebanon until the marriage hit the rocks, and he went to Moscow – “I still have a Russian visa” – and she came to London with her daughter where she thought she could work.

Living in Paris for about ten years kick-started a fruitful, creative career; it was  during the post war reconstruction and there was hope in the air. She sang in clubs where she met Edith Piaf. She was asked by friends making a documentary to take a photograph of Albert Einstein. En route to the shoot, although she was not familiar at the time with 35 mm cameras, she worked out how to use it. The result was her first professional photograph of a pensive Einstein. 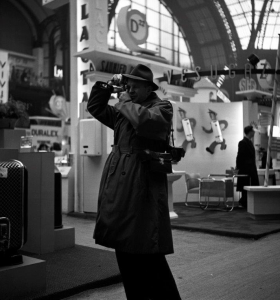 To make a living, she photographed fashion. Fashion photography at that time was studio-based, haute couture, but she came in at the very beginning of ready-to-wear garments. The new look required a new approach, so she took the models out into the street and photographed them as young girls are – mischievous, cheeky, having fun.

Her real interest was documentary work, getting out, finding stories and looking at humanitarian issues. She not only photographed the slum areas of around La Bastille – now-long disappeared under the Bastille Opera House – of feral kids doing what kids do, playing in the streets, larking about, running chores, and at school.  In Paris she also met influential photojournalists who were part of the internationally known Magnum photography agency. One was Cartier-Bresson, who she would occasionally accompany on his photograph missions around Paris. Not intended as a criticism but some of hers are reminiscent of his images – Stafford’s little girl with a bottle of  milk has echoes of  Cartier-Bresson’s little boy proudly carrying bottles of wine tucked under each arm.  She explains “That was the time, that was what you saw on the streets.” A quiet man, Cartier Bresson was prolific, walking incognito, he dodged being captured on film. However, Stafford caught him mid-snapping. 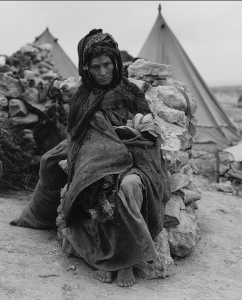 Humanitarian, social documentary was what interested her.  She went to Algeria to photograph Algerian refugees in Tunisia. Although she knew Cartier-Bresson quite well she didn’t show him her slum images. But she did show him her Algerian picture, asking for his help in selecting some for an Observer feature. The photographs could almost have been taken of contemporary scenes of displaced people in the camps around the world today. This is evidently empathised with this Algerian mother (left), Stafford herself was pregnant at the time, which gave her her first front page.

“Cartier-Bresson’s valued advice was: ‘shoot, shoot, cut, cut, until it comes’. And something happens and you feel it. You’re not always right even the very planned images can go up in smoke. And sometimes there are happy accidents.” Then you might get what Cartier Bresson referred to as The Decisive Moment.

I spoke to Stafford on the phone, she has a very young-sounding, clear voice that defies her age. I asked her what her biggest challenge had been and was surprised to learn that it wasn’t a photography project but coming to London as a single mother. She found it a terrible challenge. “There were only ten women photographers in Fleet Street and I’d never had rejection before because I’m a woman.” She was taking stills on film sets and one executive told her to stand on the wings of a plane and shoot from there. When she declined he snidely rebuffed her with that’s why you can’t commission women because they won’t do things. Stafford wasn’t convinced that any sane man would have done it either.

I wondered what she would like to be covering now. But she’s not a fan of digital, she still loves the texture, depth and atmosphere of film and feels that her time was her time finding and documenting what interested her. She thinks it is now the time of younger people to find their subject and document it in their way.