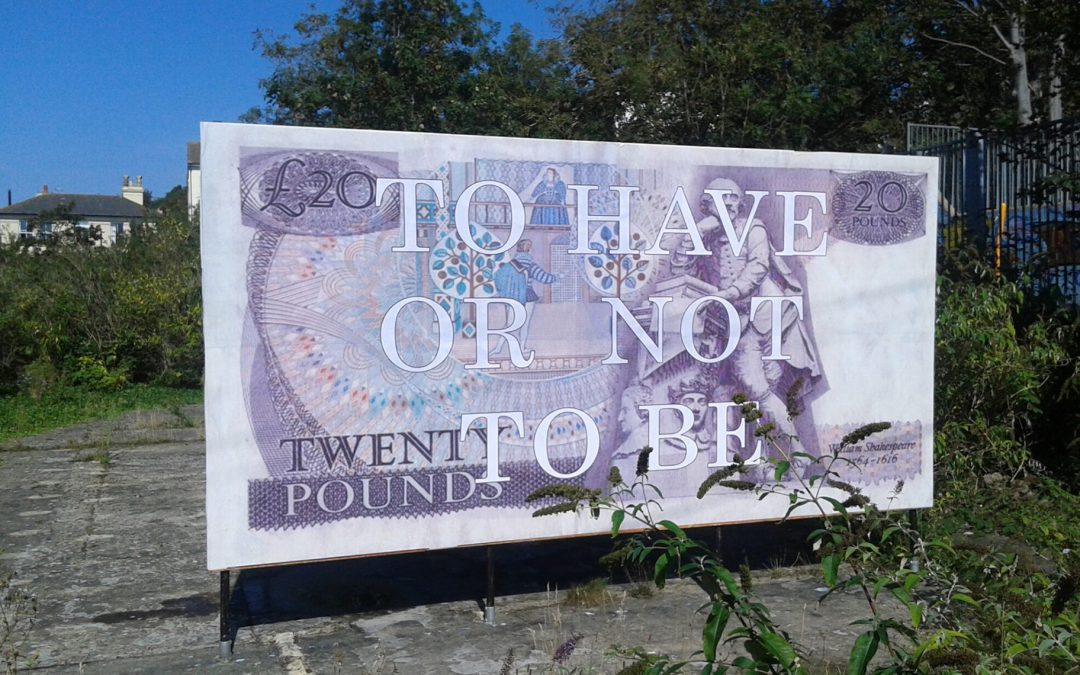 September & October 2021
The SPACE St Johns Road, St Leonards-on-Sea TN37 6HP
The work can be viewed from pavement and street level from 20 September.

TO HAVE OR NOT TO BE by Johan Muyle

Johan Muyle lives and works in Liège and Bruxelles. He is Head of the Sculpture Department at École Nationale Supérieure des Arts Visuels at La Cambre, Bruxelles.

TO HAVE OR NOT TO BE’s association of images and intentionally ambiguous and provocative meaning sees the artist paraphrasing the first sentence of Prince Hamlet’s monologue Act 3, Scene 1 of the play by William Shakespeare which bears his name, relating it to an image on the obverse of a former £20 Sterling note which pays homage to the author.

The singular nature of Muyle’s work combining carnivalesque vanities and humanism make him an heir to the Belgian artistic tradition and one of the most representative artists in the international contemporary art world as witnessed by his presence in ‘La Belgique Visionnaire’at Palais des Beaux Arts, Bruxelles (2005).

Muyle’s earlier projects in St Leonards-on-Sea were ‘Has Left The Building’ at St Benedict and ‘Fortunately thoughts are silent’ at Electro Studios Project Space (2014).

Muyle’s work is held in public and private collections in Europe and North America. He participates in international art fairs and biennials Säo Paolo (1998) and Milan (2001), Poznan (2010) and Szczan (2012).

Artist Billboard has been realised with the support of Hastings and St Leonards Foreshore Charitable Trust (Hastings Borough Council).